“Lincoln used the Declaration as such a rebuke and stumbling block to slavery. He wielded it as a rhetorical weapon, made it a rallying cry, and established it by the end of the war as national gospel.” 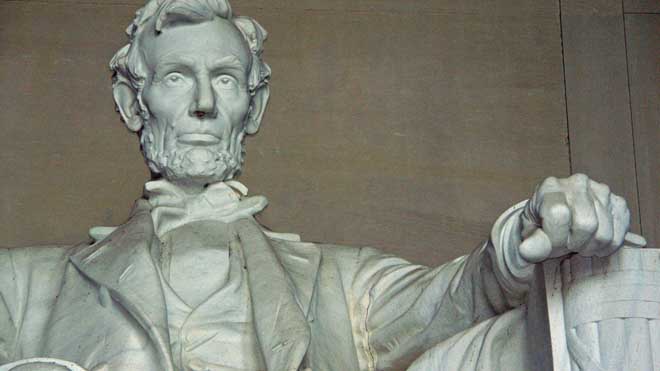 In the 1850s, Abraham Lincoln’s rhetoric was suffused with a profound sense of loss. He considered it shameful national backsliding that a new affirmative defense of slavery had arisen in the South. At the time of the Founding our nation had merely tolerated slavery; now, it was an institution actively celebrated in part of the country.

In a letter in 1855 despairing of ending slavery, Lincoln wrote to the Kentuckian George Robertson that "the fourth of July has not quite dwindled away; it is still a great day–/for burning fire-crackers/!!!"

At around this time, Lincoln fastened on the Declaration of Independence as "his political chart and inspiration,” in the words of his White House secretary John G. Nicolay.

He made it the guidepost by which the country could return to its lost ideals. His example shows the enduring vitality and the endless potential for renewal that is inherent in the Declaration.

The truths of the Declaration are eternally relevant, a perpetual call to honor liberty and the dignity of the individual.

Distant from his own father, Lincoln felt a deep affection for the men he called “the fathers.” In a speech as a young man, he said that it is our duty to transmit “undecayed” our inheritance of constitutional liberty, out of “gratitude to our fathers, justice to ourselves, duty to posterity, and love for our species in general.”

In his great anti-slavery speech in Peoria in 1854, he said, “I love the sentiments of those old time men.”

Those sentiments weren’t universally admired. For the Slave South, the Declaration’s statement that "all men are created equal" was nonsense. John C. Calhoun called it nothing less than “the most false and dangerous of all political error.”

Southern extremist George Fitzhugh agreed. “Liberty and equality are new things under the sun,” he sniffed. Indiana senator John Pettit called the central contention of the Declaration “a self-evident lie.”

In his 1852 eulogy for the great statesman Henry Clay, Lincoln noted how the Declaration was increasingly assailed "for the sake of perpetuating slavery."

In his Peoria speech, he lamented that “Little by little, but steadily as a man’s march to the grave, we have been giving up the OLD for the NEW faith.” He imagined what would have happened had Senator Pettit denigrated the Declaration during the Founding generation: “If it had been said in old Independence Hall, seventy-eight years ago, the very door-keeper would have throttled the man and thrust him into the street.”

Lincoln wanted to catch the falling flag of our patriotic patrimony. Lincoln urged that we “re-adopt” the Declaration, as he put it at Peoria. The road to salvation ran through 1776, he argued in one passage: “Our republican robe is soiled, and trailed in the dust. Let us re-purify it. Let us turn and wash it white, in the spirit, if not the blood, of the Revolution.”

Lincoln believed that this renewal is exactly the purpose for which the Declaration had been intended.

In a 1859 letter to a Republican festival in Boston marking the anniversary of Jefferson’s birth, he wrote: “All honor to Jefferson—to the man who, in the concrete pressure of a struggle for national independence by a single people, had the coolness, forecast, and capacity to introduce into a merely revolutionary document, an abstract truth, applicable to all men and all times, and so to embalm it there, that to-day, and in all coming days, it shall be a rebuke and a stumbling-block to the very harbingers of re-appearing tyranny and oppression.”

Lincoln used the Declaration as such a rebuke and stumbling block to slavery. He wielded it as a rhetorical weapon, made it a rallying cry, and established it by the end of the war as national gospel.

The truths of the Declaration are eternally relevant, a perpetual call to honor liberty and the dignity of the individual. The Fourth of July, in short, should never be a day just for burning firecrackers.