The July 4 weekend gun violence pushed the number of Chicago murder victims this year over 200. Many of he shootings were in neighborhoods where gangs are well established.

Chicago reached a tragic milestone this past holiday weekend, surpassing 200 homicides for the year, with 74 people shot between Wednesday afternoon and Sunday night. 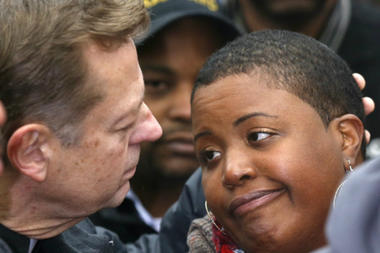 The Rev. Michael Pfleger (l.) consoles Cleopatra Pendleton during a news conference on Jan. 30 where
Chicago Police Superintendent Garry McCarthy called for help from the public in solving the murder of
Ms. Pendleton’s daughter, Hadiya, in Chicago. With 74 people shot and 12 killed over the July 4 weekend
Chicago has topped 200 murders for the year to date, many related to gang violence. Charles Rex Arbogast/AP/File

Two of the victims were young boys, aged 5 and 7, according to the Chicago Police Department. Chicago Tribune data shows they were among the 12 people killed by gun violence over the four-day period.

Chicago has recently suffered from spikes in gun violence originating from hundreds of gang factions established in block-by-block territories on the South and West sides of the city. According to police data, 40 percent of the gun violence over the weekend took place in just two neighborhoods in those areas – Austin to the west, and Garfield Park to the south.

The increase in gun violence since last year, when fatalities surpassed 500 deaths, prompted the police department to incorporate new strategies for targeting specific individuals, or locations, in an effort to prevent violence before it takes place. Police officials have also endorsed using social media to track “hot” activity among gang members, plus have cracked down on corner liquor or grocery marts, which they say have become conduits for crime.

The efforts were launched despite what police say is a shortage of manpower. In 2011, the year Chicago Mayor Rahm Emanuel (D) took office, the number of officers on the streets dropped 11 percent from five years prior. Since then, budget cuts resulted in the elimination of 1,400 department jobs, which the Fraternal Order of Police says are needed to adequately patrol high-crime areas.

Chicago Alderman Robert Fioretti of the Second Ward, where some of the violence took place this weekend, echoed that concern, criticizing Mayor Emanuel as slow to replace police retirees with new hires.

“Police should have saturated that area for the remainder of this weekend. There is a failure to police the streets,” Alderman Fioretti told the Chicago Sun-Times Monday.

Illinois Gov. Pat Quinn (D) used the weekend shootings to underscore the need for a statewide assault weapons ban. He also explained to reporters why he altered a concealed carry firearms bill so that it limited the number of weapons a person can carry to one and banned carrying guns at restaurants, bars, and other establishments with liquor licenses. Illinois lawmakers are expected to override Governor Quinn’s changes. Illinois is the last state in the nation to have a ban on carrying concealed firearms.

The weekend shootings “ought to be an alarm bell to all of us that we need strong laws that protect the public safety, especially when it comes to guns. It’s time to end the violence,” Quinn told reporters Sunday.