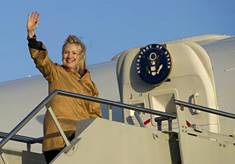 Secretary of State Hillary Clinton has given in to Senate pressure imposed by Sen. John Cornyn, R-Texas, who blocked confirmation of William J. Burns to be the next deputy secretary of state over the Obama administration’s refusal to sell advanced F-16s to Taiwan.

Clinton has agreed to announce the administration’s decision on selling 66 advanced F-16 jets to Taiwan by Oct. 1. That date appears timed until after the visit to the United States by Chinese Vice President Xi Jinping.

The Obama administration has cut off arms sales to Taiwan despite a legal obligation to provide defensive arms to the island under the 1979 Taiwan Relations Act.

The administration is seeking to avoid upsetting China, which currently controls some $14 trillion in U.S. security holdings. The large debt is viewed by security analysts as a strategic vulnerability for the United States and China on several occasions has threatened to call in the debt.

Clinton told Cornyn the administration will decide whether or not to provide the jets, along with releasing a long-held Pentagon report on the air power balance over the Taiwan Strait by Oct. 1, the cable online news outlet reported.

In response, Cornyn lifted the hold on Burns.

U.S. officials have said the administration remains opposed to selling the F-16 C/D models and instead will offer Taiwan a multi-billion package to upgrade existing F-16s in order not to upset China, which twice broke military relations with the Pentagon in protest of earlier arms sales.